This Sunday my Wisconsin Basketball Badgers are playing Penn State, and then the Packers are playing Arizona. We'll need a good lunch to get through it all successfully, so I'm making Muffuletta Sandwiches.

I began making the sandwiches yesterday by preparing an olive salad spread using a recipe I found at Allrecipies. Preparation of the salad involves a lot of chopping, but is otherwise easy. I also started some bread dough yesterday. The dough fermented overnight, and I baked this morning. The bread recipe is a spin-off of the now-famous No Knead Bread that was published a while ago in the New York Times. Instead of making one round loaf, I baked two loaves of Cibatta using a baking stone and clay baker. This technique is described in My Bread: The Revolutionary No-Work, No-Knead Method 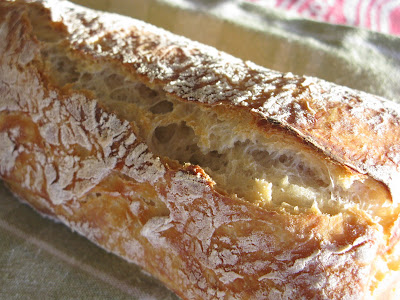